back from wherever I was

Don't ask me where the last few weeks have gone.  I have been pretending to be on vacation by binge-reading British detective books.  Between reading sessions, have had a few more kitchen renovaton issues and done some teachng, which has been my biggest pleasure.
The Teaching Part
Taught a one-day class in Jupiter, where I had the pleasure of seeing my old friend from NJ, Debbie Krajkowski.  Debbie and I took a class a few years ago with Jan Myers-Newbury at the Newark Museum and while my fabrics are still languishing, Debbie has recently made two quilts with hers.  Here is one of them.  I'm not posting the other one because I think she should submit it to a national show. 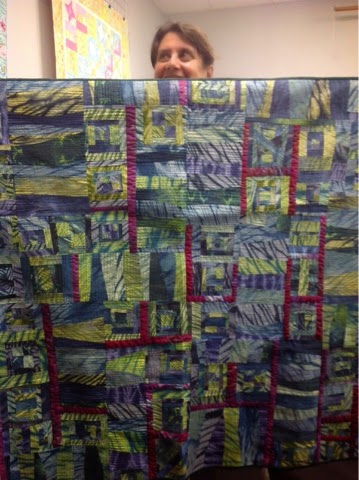 One of the class members turned out to live in the same condo development as I do, so that was a bonus.  And she invited me to the Palm Beach County guild meeting, which has a number of art quilters, so that was another nice outcome.  My Florida sewing machine is not making me happy, so I have not done much piecing while I am here.  Anyway, I haven't been in the mood to work.
Last weekend I drove to Ft. Myers to teach at Art Quilters Unlimited, where I had taught a number of years ago.  This was a two-day improv piecing class and it was a very talented (and fun) group!
This is Nancy's piece, which is fairly large for a quilt made in a two-day class.  We persuaded her to skip the border and the binding and just face it and hang it as the art that it is. 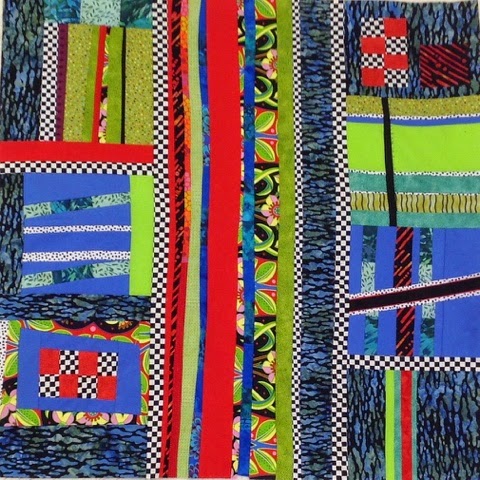 Jim's engineering background translates into precise, symmetrical work in a variety of mediums.  This time, he challenged himself to do something with the leftover pieces of a very traditional quilt. These are just a few of them. 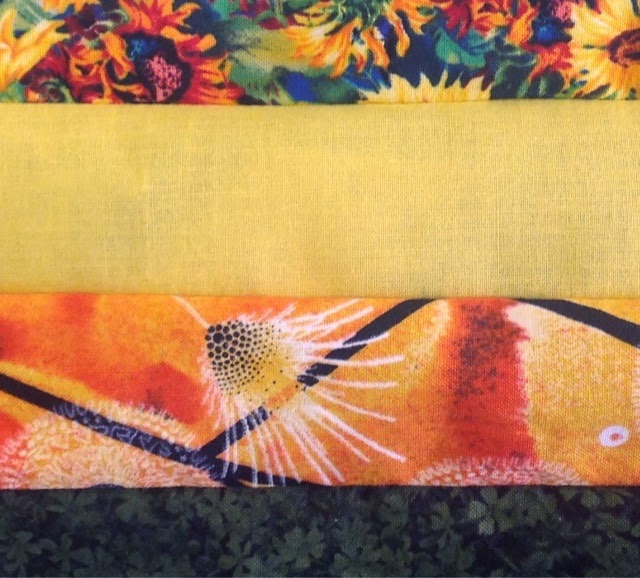 Success in working outside of his comfort zone and coming up with a really interesting result! 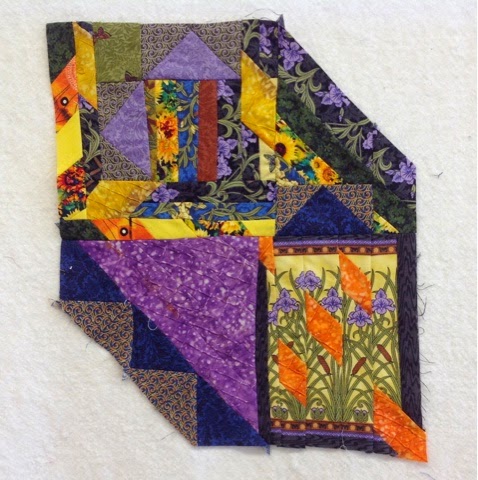 Carol's piece began this way and I can't wait to see the finished work! 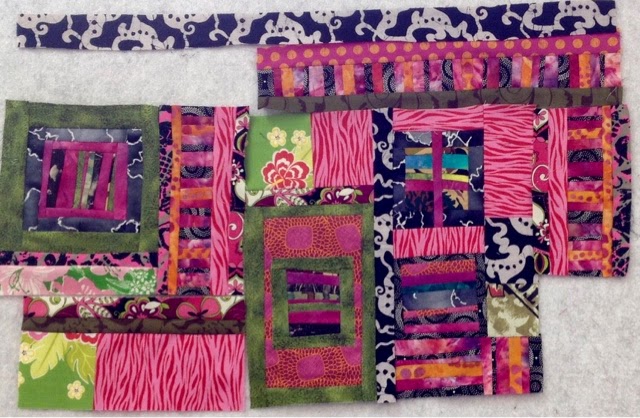 Betty has cut her larger units into small ones and is rearranging them.  See all those black and white fabrics on the wall?  She added some of them later to break up the design on the wall and what a difference it made!  I hope Betty will send me a photo so I can post it when it is done. 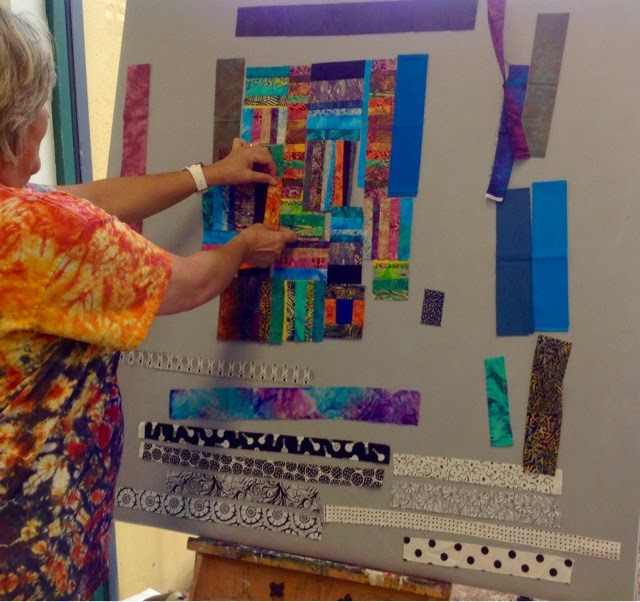 Rena came in with a few already-made units and this is how her quilt top looked after she had made some others and sewed them all together. 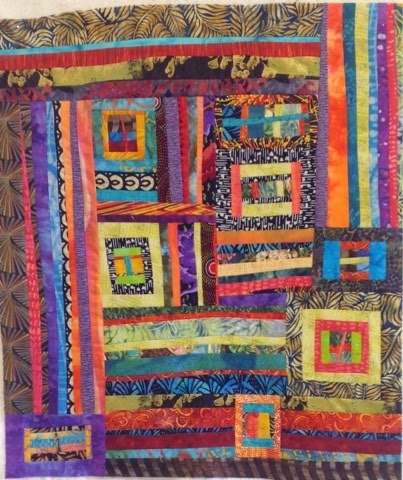 Carolyn came in with an idea for what she wanted to do with the strips: a landscape.  What a great idea! 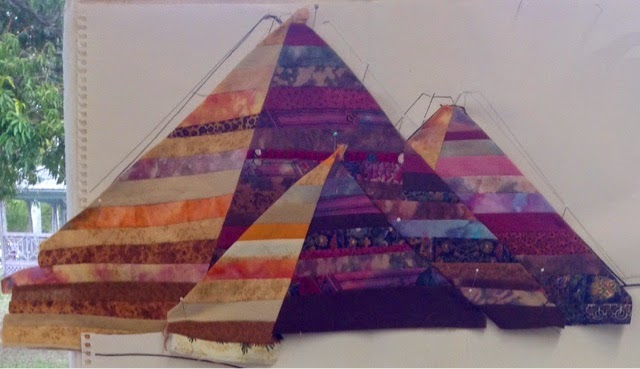 These were the photos that weren't fuzzy or too dark - but it gives you the idea of the variety.
The Other Part
The drive between Florida coast is mostly fields and palm tree farms,with an occasional stopping place.  The stop at this Shell station in the middle of nowhere provided me with something to photograph en route. 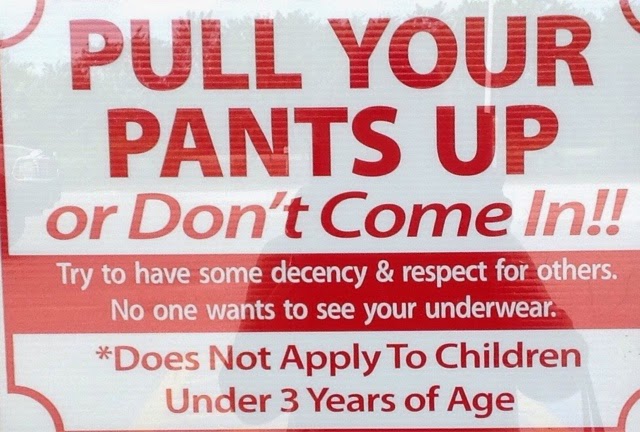 Being geographically challenged kept me ignorant of the fact that the west coast of Florida is full of islands.  I stayed on Pine Island, which is about ½ hour fro Ft. Myers, and over several bridges.
Driving over all those bridges was the bad news.  The good news was that this part of the state is fish-lovers' heaven.  I had fried oysters almost every night: something we don't get in Northern NJ.
And one night, oysters romanoff (with creme fraiche and cavier) followed by soft shell crabs, which are not even in season in New Jersey until sometime in May, if you are lucky.  And then, many restaurants don't even have them on the  menu and if they do, the crabs are small.  Heaven, indeed! 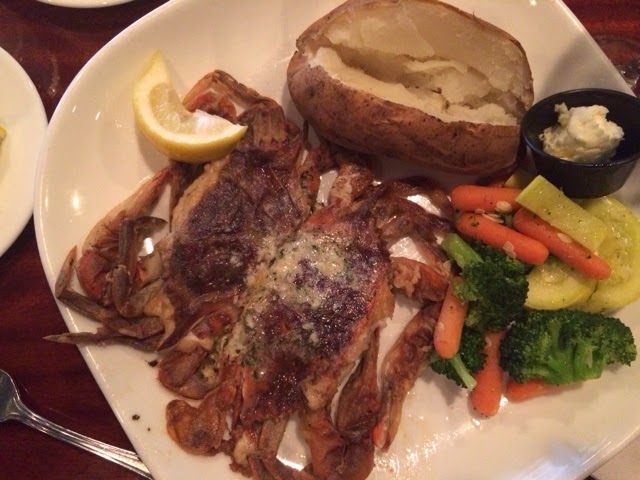 Your method of free quilting is never-ending fun! Love these new inspirations. The pyramids to me are the top. This lady is a genius!

Love the pix from your classes... always an inspiration!

I enjoyed the class and food pictures and commentary very much. I was just at a retreat for art quilters and your piecing book got a lot of praise.
Now, I'd like to know which British mystery authors you have been reading. I have my favorites including Ngaio Marsh who is really a New Zealand/England writer.

Rayna, I'm so glad you've been in Florida instead of the snowy Northeast! But wish the sewing machine had been cooperating. Well, sitting by the pool reading sounds great, too! Love the seafood dinner pictures.

I am from Calif. Love the photo of the "crab", how do you eat that?
We are going to be driving East this summer to visit relatives in Up State NY. Told my hubby if I am that close to Maine, I want to eat a lobster there...Leaving end of May and visiting new great gran in Texas first..all fun!

Sitting and reading sounds great to me! I loved seeing the pictures from your class - you had some talented quilters there.