But a brief one.

Making it an early night.  Last night I was up until 2:am, actually sitting at the sewing machine and stitching on a piece that I have probably had for a year or two, partly done.
Getting there, finally.  Here it is, under the needle.  It is sideways. 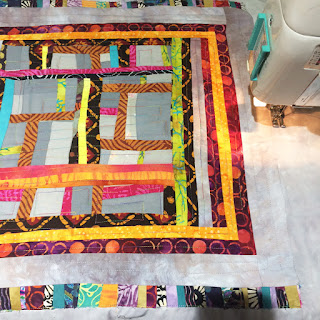 Will show it to you when it is done.  Maybe next week, if the stars line up.  The gray parts in the middle were once a quilt begun by a friend of mine and never finished because it was too ugly.  Such fun to rescue it!

Spent the morning shredding tax returns from the early part of this century, squirreled away in Marty's desk drawer.  There is an entire file cabinet on the lower level that I shudder to think about tackling.  Some years ago when I was cleaning out and shredding the kids' college bills, I was so enchanted with the colorful shreds that I made this postcard.  Still have it.  Gee, I could have made a whole series! 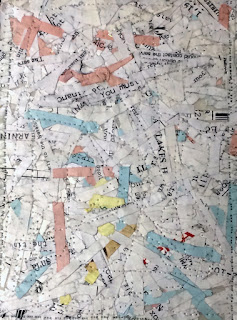 I think I said this would be a brief post. Mostly because I am too tired to write any more.
While it is still a relatively civilized hour, I shall take advantage of it.  Ta ta for now.

We are cleaning and shredding, too -- shifting contents of two rooms later this year. Getting rid of stuff now means less to haul around later.

I did a bunch of shredding not too long ago. I will not be making any art with mine! I just want to pare down and lighten the load.

Love that postcard! You've got better things to do now than making shred art! Have a great weekend. xoxo

You just keep on keeping on!! Brava!

How nice to drop by and find you have managed to find time for sewing as well as clearing - though actually I rather enjoy shredding.

I gave up shredding and hired a shredding company. The truck came, picked up my boxes and notified me as soon as the shredding was complete. It wasn't cheap but it got done in record time. Reminiscing was just taking up too much time. You have inspired me more than anyone to "just gett'r done" so next week I am starting in one corner and work my way thru to clutter. Bet I find all the things I have replaced because I couldn't find them...hmmm

This gray is a perfect color intermixed with these prints...lovely!
I bag my papers still with rubber bands and drive up and drop off at the shredder place...fun to watch the big machine grind up in seconds and then I drive to the exit...(small fee)

I Love that postcard! You've got better things to do now than making shred art!

I did a bunch of shredding not too long ago. I will not be making any art with mine! I just want to pare down and lighten the load.


and also thanks for your sharing this topic !