For the last month or two I've been too busy to work very much.  I've been stupidvising my bathroom renovations, which are almost finished.  Waiting for the granite counter/sink/faucet to be installed in the guest bathroom and doing about 10,000 other things that need to be done before I leave for NJ in a couple of weeks.  I've cleaned up the sewing/guest room because my daughters are coming (first one, then the other) and they will need to sleep in here.  This is the good side of the room - LOL. 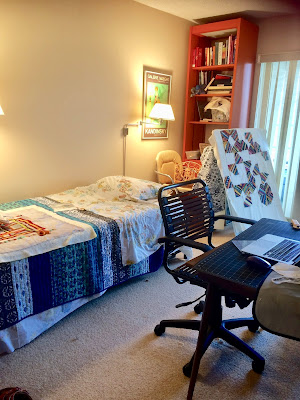 I have barely had time to sew but needed to do something creative, so I decided to take a string piece that has been sitting around for yonks and give it the light of day.  As usual, it had been an experiment:an idea I thought (at the time) was worth pursuing. This one didn't work very well and when I dragged it out this morning and took a photo, I knew it was due for triage. 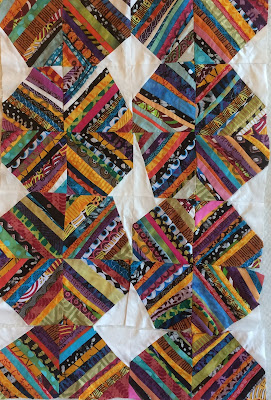 So... I took it apart. When I separated all the blocks, I discovered they were all slightly different sizes and shapes. Uh - was I drunk or just tired when I sewed them together?  Most likely, just in a hurry.  Not a good idea.

I trimmed all the blocks to the same size (5") and tried another arrangement without sewing them together. 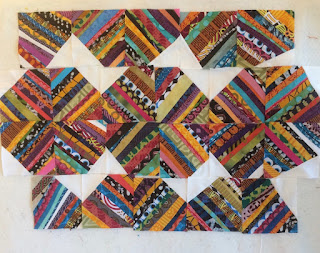 Better, but not much.  The blocks were too big, clunky, and close together.  They needed more space around them but I had no more of them and wasn't about to make additionalones.  Other fish to fry!!
Down they came. Then I wondered what if I  put space between the small units and played with a sort-of alternate grid? I arranged and rearranged, and here is what is on my wall now.  I still needs more negative space around it, but basically, it's done. I think I'll stick a fork in it.  What do you think? 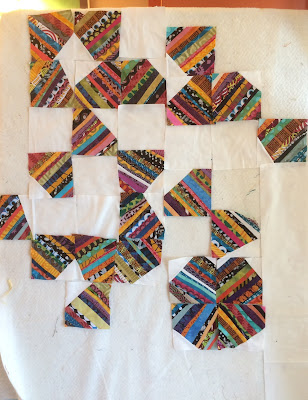 Of course, once I sew the pieces together the whole thing will get smaller and may change a bit - but that's okay.  It can't be worse than the first version! But I think I may let it percolate for another day, just in case.

Wow! What a change! Just goes to show ya.

ohhhh This reminds me that I have a box of vintage string blocks - from around the 30's - that I always meant to put together. They were gifted to me from an estate of a beloved neighbor who was a quilter. I really need to get those out and see if I can come up with something as interesting as these!!

I like the latest version. Since the blocks are all slightly different putting the negative space between then adds interest to the irregularity of them rather than trying to force them to look alike.

I got my quilt back yesterday. Thanks!

I think the adjusted lay out feels playful and works quite well. Think of children dancing on the playground ~ ~ ~ thank you for sharing the process and good luck with all of your renovation completions!