Sherryl Buchler and I took the PATH into the World Trade Center yesterday (Thurs). Sherryl, who lives in AZ, had a special reason for wanting to visit the site and I was happy to go with her.  The new WTC transportation hub is under construction and as you come out of the PATH trains, the scene is greatly changed from what it was a few years ago.  I was a bit disconcerted, since my visual memory of the exact scene is just that: a memory.  Here is the sculpture that decorates the wall as you walk to the PATH. Station is still a work in progress and much under construction.  I want my old station back, with the Hudson News stand where it was and the PATH a few steps down instead of two flights...but nothing in life stays the same. 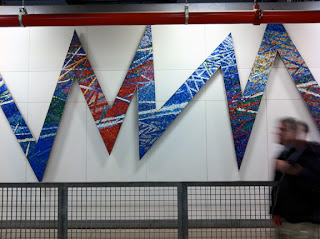 I saw an interview with William Shatner this week where he said that looking at photos depresses him because those things/people no longer exist.  The moment is gone and you can't get it back and it makes him so sad. I don't feel that way, but I can understand it.

Moving on to happier things...
Across the street from the WTC area, the park was filled with Occupy Wall Street protesters -- a joy to behold.  Drums, music, dancing, and hundreds of people sitting/standing quietly (or not) to protest what has been so destructive to the economy. 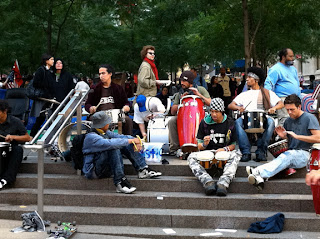 There were plenty of police standing around --also peacefully, thank god, after last week's inexcusable debacle -- and people were so well behaved that some of the cops were reduced to reading the newspaper, just to relieve their boredom. 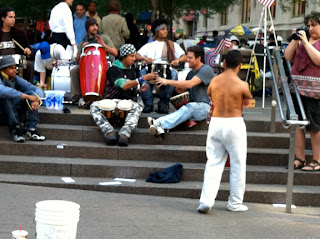 The park had been turned into a campground; sleeping bags everywhere. And some rather bizarre people sitting around. This guy seems to have fallen asleep while playing this instrument. No sound. 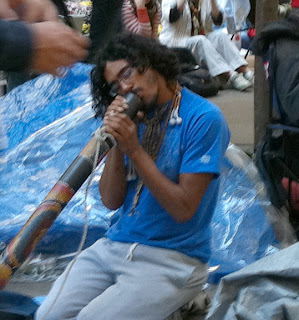 This woman's meditative state turned her into a blur. She appeared to be sitting still, but she must have been vibrating as I took this picture.  It couldn't have possibly been my photographic skills. 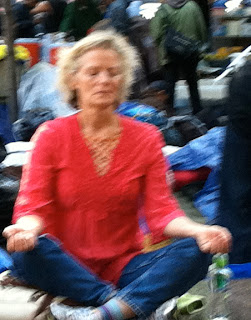 There was something deliciously incongruous here. Made me smile. 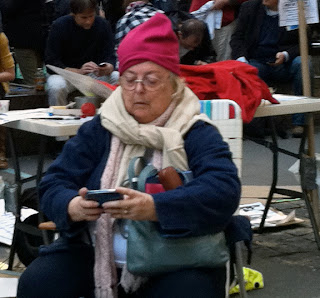 Of course, there was the requisite Presidential candidate.  This guy was holding forth on who-knows-what. I couldn't get close enough to hear him or to even see what his name was, so I rolled my eyes and moved on. 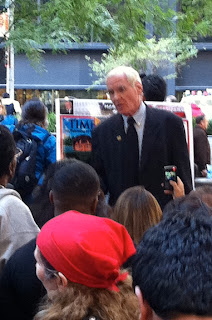 There were so many people with signs that I couldn't take enough pictures. Here are just a few that were accessible. 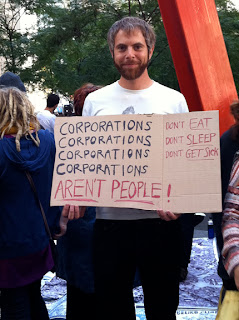 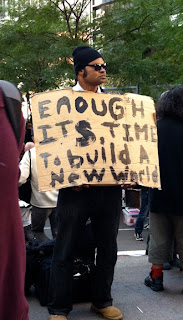 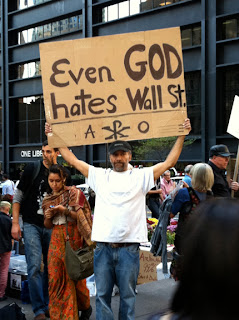 And then, as we walked off the delicious Indian lunch we had had, we passed a NY Sports Club just up the street from the protests. LOL - only in New York. 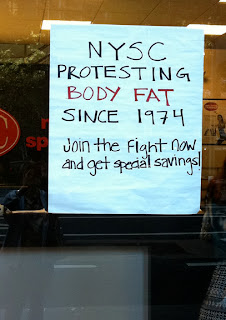 All in all, another good Manhattan day in perfect Fall weather and in good company.  Best of all, it was so good to see so many people coming together in a common cause. Whether it will be taken seriously by those who need to act to change things, is another question. Hope springs eternal...

I was down there on Wednesday and loved the energy. I think (peacefully) questioning things is what makes us good Americans - no matter which of many sides you take, or even none at all.

His name was Jerry Braun.

Gosh, the woman in the first crowd scene with the dark glasses looks just like Dijanne Cevaal...but I think she's still in Australia.

DH and I are on our way to the train for our trip to NYC this afternoon. Meeting my bro from St Louis who really wants to get to get to WTC. After the "debacle" I had been pessimistic about it...thanks to your joyful post (except for Shatner) we will. Thanks!

Thanks, Sherryl. Glad one of us was paying attention - or has some brain cells left.

I was thinking of taking coffee to the symbolic group occupying here...just can't figure out how to transport enough of it...maybe bottles of water...

That vibrating lady really needs her meditation, doesn't she? The round lady in the pink hat must be related to me in some way, however, I couldn't tolerate such an event, I'm too much of a hermit. However, I wish them well. Wouldn't it be fantastic if their efforts did bring on some positive changes?

Thanks so much for posting these pictures of the protest. One is coming to New Haven and I will be there.

Hope you are well