Happy Blogiversary to me

Celebrating a decade of blogging today, with a Haagen Dazs ice cream bar. Not even the flavor I like, but beggars can't be choosers.  I need dark chocolate but don't have any.  Back to the point: I wrote my first post on January 31, 2005 as a thinking-out-loud-while looking at a shot of something I was working on.  TEN years - where has it gone? (rhetorical). It doesn't matter where it has gone, it has vanished. Evaporated. Disappeared - never to be gotten back.
I should do a giveaway in honor of my blog's longevity, but since I don't have anything in Fla to give away, that idea seems a bit lame.
Tonight, just for the heck of it, I'm posting what has been sitting on my Florida design wall.  It started as a couple of nine patches and I've been playing with it.  I should probably just stick a fork in it but I won't because it doesn't quite come together.  Too much chaos - like the couple of weeks i've just had. 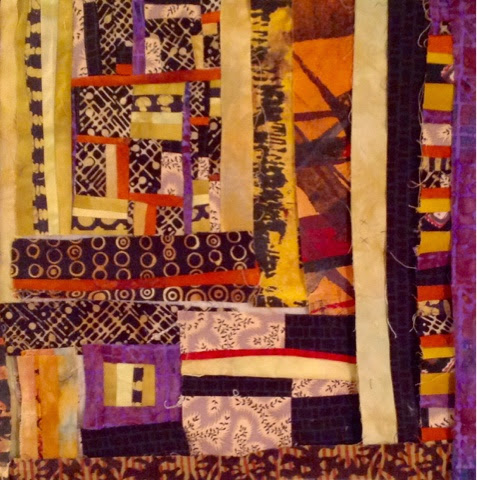 Still no Internet on my mac and intermittently on my ipad.  Between that frustration and the Sears service tech I threw out of my apartment because he was a screaming, raving, nasty lunatic and a few other aggravations, I am DONE.
Tomorrow, as I start my 11th year of blogging, I will pay bills, go for a walk, and maybe do some therapy sewing.  Monday, someone is coming to fix my brand new Bosch non-working dishwasher, and the electrician will be here again to move ceiling lights he put in the wrong place.  I am expecting a few more things to go wrong before the week is out.  Stay tuned:-))  And thanks for being there for so long.
at January 31, 2015

OMG! I have mine next month. I think I have been following you for that long, too! Congrats. Sounds like Florida is not the home of best customer service!

Happy Blogversary Rayna. I hope the next fortnight turns out better than the last one. Here's to the next ten years :-)

I hope all goes well with the repairs and such next week. Nothing worse than bad customer service, that's for sure.
Happy 10th! I think I started following you in 2007, but I agree time just flies, especially when you're having fun! Thanks for sharing so much in your blog... always enjoyable to read and inspirational too!

Time flies when you are having fun. Thanks for all you have contributed to us!

I agree, time does fly! Thanks for all you've contributed, and all I've learned from you. I hope the rest of your Florida stay goes better!
Hugs, and happy blogversary, Rayna!

Congrats on 10 years of blogging. I really enjoy reading your blog and regularly go to your book as a reference. Keep up the great work.

Shari - a prim and (not so) proper quilter said...

Congratulations! Hope to be reading your posts for many years to come.

Congratulations on 10 years of blogging! I think after that long we should be sending you something to celebrate, rather than the other way around.

Congrats, I've been enjoying your blog for year. Thanks

Now I have to check mine blog, since times seem to fly,, and I am putting together a give away for Valentines.
You certainly are having a time with your kitchen, makes me rethink any type of remodeling!
Enjoy to you therapy...