Today was the spur-of-the-moment screenprinting studio workshop that I scheduled due to popular demand. Like all of my studio classes, this one was limited to five people because of space and of course, as usual, I was so busy teaching that I forgot to take pictures of all the cool stuff hanging on the design wall. A bunch of live wires, this group!

Vivien Zepf and Sherryl Buchler were both in the class and printing up a storm.  Vivien had to leave early, so she printed nonstop. She's in the turquoise at the back of the picture between Ife and Sherryl, probably packing up. I hope she will put some pix of her fabric on her blog. 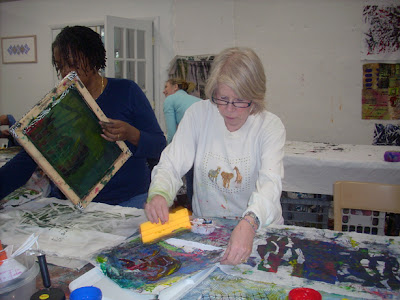 Carol Esch, an experienced dyer, came to class with some hand-dyes that she thought needed some TLC and she printed some striking designs using masking tape on the screen.  This is one in process. Linda took a similar screen printing class with me in November but wanted to learn more, so she came today.  The more she played, the more exciting her fabric became -- and becoming more familiar with the process enabled her to experiment without worrying about how it would turn out.  In fact, this fabric turned out to be her favorite -- and I understand why.  Later, she printed silk scarves with thickened dyes and a similar screen.  We steamed them and she took them home to wash; I hope she sends me pictures of how they turned out. 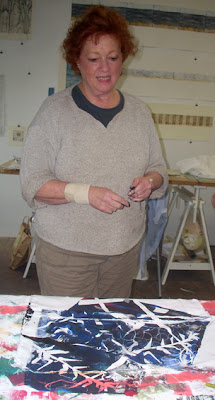 Ife (pronounced Eefay) had never screenprinted before, although she stamps and embellishes and made the most gorgeous piece out of one of her husband's shirts.  I wish you could see it.  Anyway, she didn't like anything she printed at first but by the end of the day,she was really happy with what she had done.
Here is one print she made 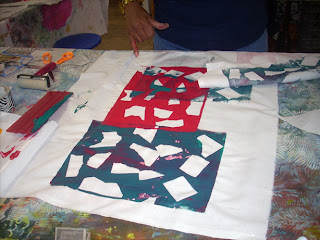 and here she is, admiring the ghost print.(Vivien in back, again) 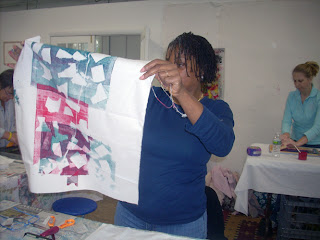 It felt so good to get back into the classroom -- it has been a long winter and this was an energizing day.
They want to know when the next class is. Uh - we'll see. For the moment, I am staying put in this chair, watching a little video.
at May 17, 2011

OK! Now I am very jealous.

Funny that you put this video of Miss Emma into the same posting with all these playing ladies. Serious and joyful occupation, genuine, relaxed concentration -- that's what they obviously have in common.

So glad I found you through the miz kate dot com Artist blog hop!
I am your newest blog follower. :)
Looking forward to seeing your upcoming posts!

I welcome you to check out my art blog, too!