Yesterday was the Studio Six crit group meeting and all five of us were there (we started as six, went to 15, to six again and then Kerr Grabowski moved back to Mississippi). We didn't think we needed to change the name of our group every time.

This is part of Rachel Cochran's latest piece in her Celestial series; it's going off to an exhibit in Botswana. Rachel does fabulous surface design but she started as a traditional quilter and is a quilt historian who co-authored the book on New Jersey Quilts and recently, on the quilts of Florence Peto. 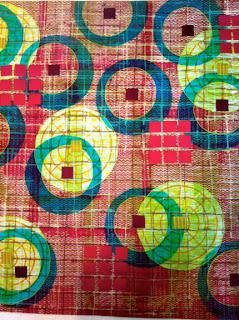 Hollie Heller, who works in mixed media, showed us the amazing new series she's working on and we gave her our feedback and some ideas for variations.  Her work is highly original and simply wonderful.

Judy Langille went high-tech and brought a jpg of the piece she wanted feedback on.  Amazing! We loaded it into the laptop and bingo! -- we could see all of the permutations and we unanimously agreed that she needed to back to an earlier version.  What a great idea!

Diane Savona, who just returned from a month in Hiroshima, Japan, showed us her in-process piece of a map of HIroshima. A real work of art with artifacts attached, which she had scavanged from the beach at low tide. 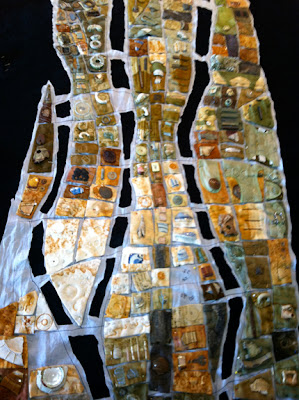 The area on the lower left is Hiroshima's Ground Zero.

Diane recycles and repurposes and works completely by hand.  Mind-boggling.  The quilt is loaded with fragments of every day life that have washed up on the beach at low tide; Diane collected them while she was there.  Broken crockery, shoe leather, WWII era coins, unidentifiable metal objects...some more recent, but many (like this melted glass below) - casualties of the bomb dropped on Hiroshima. 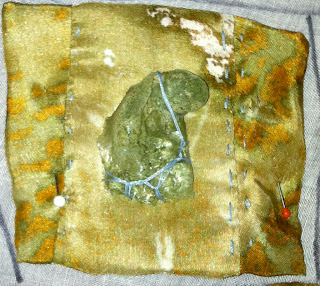 Still washing up on the beach at Hiroshima, nearly 70 years later.

After seeing Diane's mind-boggling piece,  my red shibori in-process piece was anti-climactic, but I came away with some ideas of what else to do with it.  I also brought some books to share (always good to do when there is nothing else to bring).

On the subject of maps...a few months ago, when I was at the P.S. 1 art book fair in NY, I was tempted to buy this book, but didn't and was sorry afterwards.  Published by the Hand Drawn Map Association, it is whimsical and wonderful and makes me smile.  Anything/anybody who makes me smile is welcome into my life with open arms.  This book is no exception. 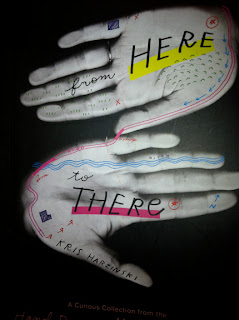 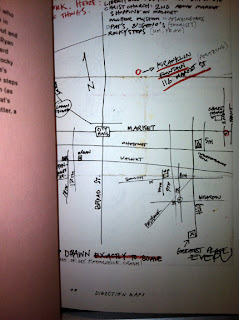 I also brought this book to share - which I have not yet had time to read.  Kathryn Sylvan recommended it in October and I finally bought it.  The history of stripes and how they have been used/what they have symbolized through the ages. 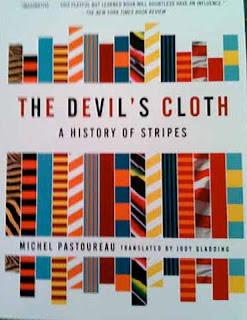 This one might be the best one I bought (also at the art book fair), published, astoundingly, by MIT Press. I might have mentioned it at the time I purchased it but even so, it bears repeating. Last night I went back to my therapy sewing and now I am going to grab lunch and go to the studio for a while to do some more work on whatever strikes my fancy.  I have been feeling very disorganized and since I was too tired last night to write this blog post, I have spent time this morning doing it instead of doing things on my "must do" list.  That includes a visit to the supermarket - UGH!  No wonder I am writing, instead.  I am having company for dinner on Friday night and it would be nice if I had something to serve them, so I guess my avoidance tactics won't work for too much longer.
Meantime, I have at least blogged about something besides Miss Emma (on her way to Wisconsin for the next 10 days) and my New York City adventures.
TTYL :-)  xoxo

You have a very exciting crit group. Wish I could be the sixth!! Happy Chanukah! I know it will be bittersweet for you this year.

Thank you for sharing the photos and information from your crit group and books.

You're in my thoughts during this holiday season.

Okay - I'll send you some E-lint to make you laugh. Or at least smile! Hope the sun shines on you - if not from the sky then from your loving friends. I know I am sending some!

The Hiroshima art makes my breath stop and gives me shivers of the less pleasant kind. Very courageous. Probably a skilful way to deal with horror.
Have a great time!