Last night was the first night of Chanukah and I lit the menorah, as I will for the next seven nights. Since the holiday lasts for eight days, my kids and grands will be here on the 27th for potato latkes.  The idea of potato-apple latkes (NY Times, of course) is appealing this year. In the past, I have made sweet potato latkes (which are to die for) or zucchini pancakes.  I'm willing to experiment but everybody wants potato.  OK.  Since the miracle of this holiday was in the oil, it doesn't matter: jelly donuts, called sofifot, are also traditional (but not in my house) and people make those, too. Hmmm....

If you want my recipe for potato pancakes (fabulous any time of year,whether you are Jewish or not) -- and whatever else I have blogged about this holiday in the past, go here.  It's more fun and much more interesting than this year's post!


Yesterday in the studio I printed scarves, although I had originally intended to sew.  Too late for Xmas gifts( although Chanukah runs for another 7 days) they nevertheless were fun to do.  I screenprinted, painted, and sprayed some with water so they look as though they were caught in the rain. Graffiti scarves - not supposed to be neat and pretty:-). 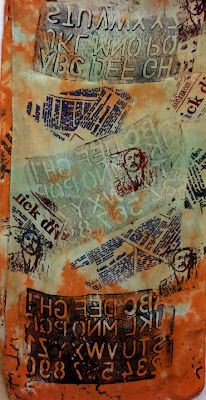 If you want to treat yourself or give a Winter Solstice, Boxing Day, Chanukah, or even a belated Christmas or New Year's gift, it's first come/first served.  Silk, machine wash gentle/machine dry low. $60 first class mail. I take check or Paypal and ship in the U.S. only, this time. As usual, there is one I am reluctant to part with (but will). Can you guess which it is?
Happy Solstice to all - the days get longer, starting now!

Hard to pick a favorite! probably # 5.

Happy Chanukah and Solstice! I hope the New Year brings you much joy, laughter, and creative adventures. Your scarves are so very beautiful. Have a great day.

I don't know which one you're reluctant to part with, but my favorite is #6. Or maybe #4. They are all gorgeous, of course!
Hope the holiday of the light brings you light and lightness! I know this year must be different for you; my prayer for you is that you keep the laughter and joy - and the wisdom to know them when you see them - alive in yourself. And keep on artisting!

I love them all but #1 is my favorite.....so I bought it for myself! Every year I buy myself a special gift for my birthday. This year it's one of your beautiful scarfs.
Happy Solstice to you!
Mia

Beautiful scarves! And thank you for the recipe for potato latkes! I first had them when my step-dad's mom made them... she was from Lithuania and made lots of yummy new(for me) things at holiday times, including latkes. I may have to splurge (calorie-wise) and make some this year! Happy Hanukkah, friend!