Uh - not THAT kind of depression. The kind we're having that they call a "recession." I don't know about you, but it has brought out my culinary creativity; reminds me of when I was married to my first husband and I made a lot of tuna casseroles with canned mushroom soup. He loved it - I hated it. Have never made it since.
But lucky me, I own a first edition of MFK Fisher's How to Cook a Wolf. She was arguably the best food writer ever and this is an absolutely delightful book on the subject. She wrote it during the WAR, when butter, sugar, eggs, coffee, meat, and who-knows-what else were rationed. Originally published in 1942 - hardcover, $2.50. I found it at a used book store in the early 1960's and it is a fabulous read!
Of course, I have never been motivated to make Rabbit in Casserole, Roast Pigeon, Kidneys in Sherry, or Calves Brains. But her basic minestrone recipe looks divine and she has a couple of cake recipes I have made that are really good and don't require eggs. War Cake is a winner (but I wouldn't advise using bacon fat as your shortening). Tomato Soup Cake is my favorite and 25 years later, I sent for a Campbell's Soup cookbook that had almost the identical recipe in it. Try it - it is really good - esp. with a bit of icing made with cream cheese or butter, powdered sugar and a little rum. Of course, MFK Fisher's recipe is a little lacking in details, such as how long you bake it - but those were the days when people KNEW how to cook and bake and could figure it out. It makes a really good cake. If I had a can of tomato soup in the house, I'd make it right now. TOMATO SOUP CAKE 3 Tablespoons butter or shortening 1 cup sugar 1 teaspoon baking soda 1 can tomato soup 2 cups flour 1 teaspoon cinnamon 1 teaspoon nutmeg, ginger, cloves - mixed 1-1/2 cups raisins, nuts, chopped figs or other dried fruit, what you will. Cream butter, add sugar, blend thoroughly. Add baking soda to soup, stirring well & add ths alternately to first mixture with flour & spices sifted together. Stir well & bake in a pan or loaf tin at 325. Notice that the Campbell's version looks more glamourous. Trust me, it's just as good in a loaf pan. 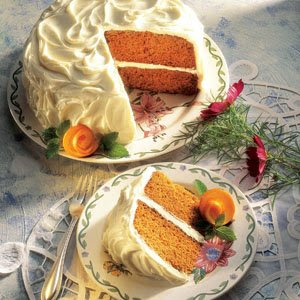 I worked most of the afternoon stitching on the invitational piece I am donating to Virginia Spiegel's Fiber Art for a Cause Reverse Auction 2009. Then, I finally went for my long-overdue pedicure. A luxury but also a necessity, since I go around in sandals all year and other people have to look at my feet . Despite this downturn, I feel the need to take care of myself in ways I have never really done. And I am not feeling the least bit guilty about it. Too little, too late...but that is another story. I will spare you a picture of my toes, lovely as they are. Yesterday I spent some time at the studio and while I was ironing, I was throwing fabric at the wall. Here's how it looked at some point in the afternoon. I love auditioning the pieces I'm ironing -- most of which never turn into anything, but evoke possibilities. That's what life is all about: possibilities. 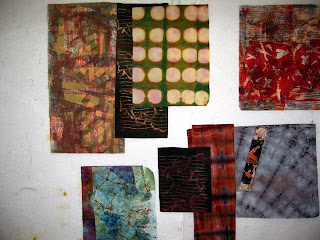 And here is a fragment of what's on my wall at home. I had forgotten I even had this fabric, printed several years ago and buried in the pile. 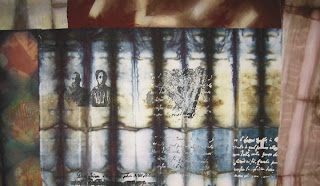 Don't you just love when that happens? It's like finding money in the pocket of jeans you hadn't worn in ages.
at December 06, 2008

Rayna, i saw your memorial quilts on your website, and i am deeply impressed. So it must have been a double "aha!" to find this. --
About cooking. I never thought that the crisis would have such an impact on everyday life in America! Well, I hope, economy will recover soon, these effects hit innocent people in most cases, i'm afraid. The guilty ones had their share and stored it away, i guess.
Europe is well equipped with recepies in times of need. Carrot or turnip cake, for example. I found that some nations have "holy dishes" like the "fish cake" in Finnland. It was invented when in 19th century there was this cold year and almost no crop had grown. They just had rye and very small fish from the lake, which they wrapped in rye dough and baked it. It is not very attraktive in looks or taste, but saved lives and so it is sacred.

MFK Fisher is simply The Best food writer - I have many if not all of her books. As a follow-on, try Margaret Visser - Much Depends on Dinner goes into the history of various foods - fascinating!

I never would have thought of tomato soup in a cake...but it looks yummy so I'll give it a try. I love to bake, especially around Christmas!

A note to your other post...I have a collection of those big washers/circle things bought for rust dyeing fabric...and as soon as I get past the holiday rush I might actually get around to using them... :-)

I love your fabrics! Can't wait to see what you do with them... I, too, have one with circles, and really want to make something with it!
Your recipes take me back to childhood. Grandma had several recipes created because of rationing, and my step-mom ALWAYS cooked with bacon grease!

My Mom used to make that Tomato Soup Cake all the time...it was her basic cake standby recipe. Brings back more memories.

this cake was a standard in our house when growing up. I made toit in Sept/Oct at the outfitters lodge I was cooking at BC this fall.... they loved it. I had to use dried cranberries instead of raisins (in EVERYTHING) as the outfitter didn't like raisins. It packs and freeze well, with or without icing. It made a fussy little boy who didn't like chocolate quite happy!

War Cake was a Christmas standard in our house as well.

argh! You're making me hungry. I just may have to try that cake and those bar cookies.

As for hot chocolate, have you ever tried a sprinkle of chili powder in it? Since seeing the movie, "Chocolate", everything I make gets chili powder ... hot cocoa, frosting, hot sauce, cakes, chocolate covered anything. The chili does something to the tongue that gives great satisfaction to your mouth.

Oh, and YUM about your fabrics, too.

I've heard of that tomato soup cake since I was a kid and never tried it. I think I'll make one! I have been going back to some of my thriftier recipes lately and am pleased at how much I am enjoying them. I'm making potato soup tonight, with bacon and onions. Perfect for a cold, rainy Sunday. Mmmm. The house sure smells good.

So much for dieting.....I had to try your tomato soup cake, and it is yummy! I added raisins and baked it for an hour in a loaf pan.

LOL, Karen. That's my next project.