cleaning out the cobwebs

I really accomplished a lot today. "Sure," says my husband, "you spent money." LOL. Well, how else are you going to get anything done?

You know how when you run out of toilet tissue, every bathroom in the house runs out the same day? Well, that's what happened with our scotch tape dispensers.  Every single one became empty within a day of each other.  Staples was my first stop this morning and now I have not only scotch tape but a new supply of little post-it notes.

Next stop: the appliance store where George, the manager from the other branch had gone, leaving in his wake, half-dozen employees who knew nothing. When I walked away from George, I had ordered a G.E. Monogram ice maker, which will be delivered and installed next Wed.  I also bought the extended warranty and since it is not made by Whirlpool, I am keeping my fingers x'd. 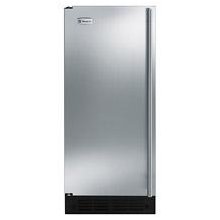 This means I have to clean out all the extraneous stuff and organize so they can move the furniture. I started with the sewing room and got as far as the top of the trunk, which is now down to the absolute minimum. 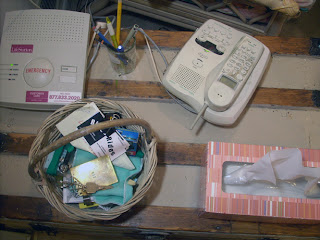 One lone basket. I got rid of two, the contents of which included several bottles of nail polish in a shade I would never wear these days. Eight Garden State Parkway tokens, which are useless unless you have a drill and can make a necklace with them. Six rolls of Kodak 200 film and a throwaway camera, all of which have been used. I should probably get them developed if I can find someone who still develops film.  CVS?  In addition... 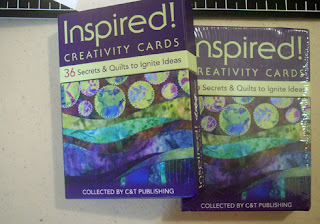 I think one of these cards in the Inspired! deck is mine, with a quote from me. What do I do with them? 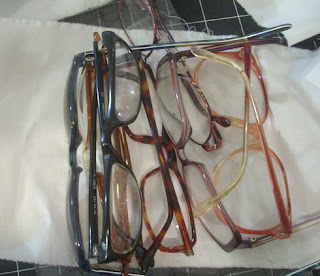 Six or seven pairs of glasses I hope never to wear again.  They need to be donated. 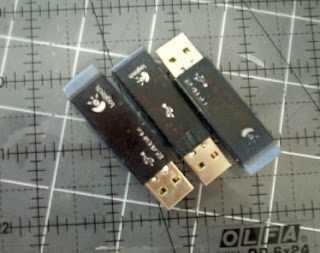 Uh - I have a mouse that does not work with any of these. Shall I be daring and throw them out?
BUT -- I did find two things I had been looking all over for and missing terribly. They were in the upstairs hall closet I don't use. (well, I guess I use it for something). This was a top when I found it somewhere in the early-to-mid '90s.  I put backing and batting on it and hand-quilted the whole thing. It is a vision of loveliness and in great condition. 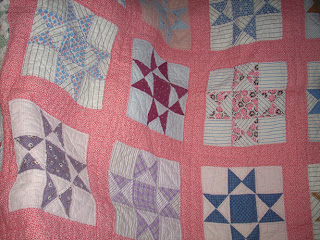 This one is my all-time favorite -- a beautiful ugly duckling. Depression era. 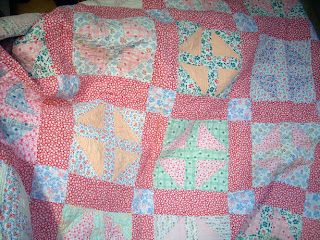 When I found this top on the floor in an antique store in Nyack, NY, it was filthy. The backing was an old sheet, the batting was a smelly wool blanket, and it was not quilted but tied. With red and white bakery string.  I rescued it and liberated it from the filthy blanket and back. I put new batting, a small border and binding, and used what looks to me like a 1940's or 50s fabric for the back. I hand-quilted it and it is my favorite.  When I was sick in 2000, I cuddled under it for all the time I was post-surgery and in chemo and decided I wanted to be buried with it. It covers me as I sit in my chair now and write. I love it because the fabric combinations are wonderful and quirky and un-self-conscious.
Finally, a packet of photos from November, 2001.  I looked terrible; my hair was still not back in all the way.  But I was alive.  Here I am with year-old Benjamin, who was literally being born while I was in the doctor's office learning that I had cancer. Ben just had his 10th birthday. 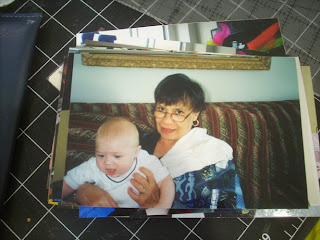 And here I am (my hair came in curly) -- with my favorite uncle Solly at my birthday party in November 2001. Sol was my father's youngest brother and everybody in the family adored him.  He had Parkinson's and one kidney; he died two years ago when he had had enough and decided to stop dialysis. 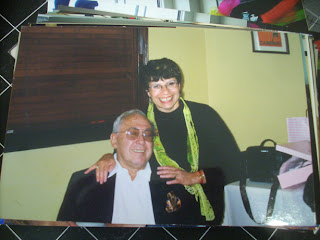 There is nothing like the hard copy of photos.  I need to take those rolls of film in.

We are GE people, ya know; and the ice maker will work like a dream.

What a fun post, Rayna! Are you giving away the Inspired cards? I'll take them! And, you can stick in a parkway token or two for a little nostalgia.

Don't bother with the mouse thingies. I'm pretty sure they won't work on another one. We have two Kensington wireless mice where the little thingies broke and asked Kensington if they can make new ones if we give them the serial number and they said, no, each one is unique only to the mouse it was made for. :( BTW, they make the USB keys very tiny now and you don't have to take them out of the laptop, ever.

I was going to comment the other day, but never got to it. Which Barnes and Noble do you frequent? When I am in the states I go to the one in Clark. I was there a few weeks ago and love that as infrequent I'm there, nothing ever changes. I sat down for an hour and a half with a whole pile of quilting and needlework type magazines and had a ball.

Wow! you did do a lot. Ridding cobwebs while cleaning your house and also dusting off memories of good things. We all have to have days like these....

Bless you, Rayna. Your post of seemingly random things made me think about some stuff I prefer not to think about! I, too, would like to be put to rest with my favorite quilt which saw me through a number of tough things. I only wish I had made it sooner as it would have come in handy. Nothing like having a grown up blankie.

I actually love cleaning and organizing closets and other out-of-the-way places in my house for the exact reason you've posted all your amazing memories here... you just don't know what you'll find, how you'll feel looking at it again after years under an inch of dust, and whether it might take you somewhere in the future.

Thanks for sharing this with us, Rayna.

I enjoyed the story about your favourite quilt. Things don't need to have a perfect and exiting design to become something we wouldn't miss. They have a life and language of their own.
The photos say so much! You are so brave and optimistic. I can hardly imagine how you were feeling in this situation; it moved me.

touching post! and through it all your magnificent smile was in place. Inspiring.

What a treasure trove of items you uncovered! So glad you are finally getting the carpeting installed and can then get the rest of your surroundings put back together. Love the story of rescuing the quilt!

The quilts are a picture of cozy! Every girl needs a favorite blankie. I'm so glad you are well now - thanks for sharing.
Suzanne G in NC