While we have rain instead of snow and it is relatively warm (was around 50F today), it is still icky enough to make me get out the pressure cooker and get busy.  The ultimate comfort food -- barley mushroom soup! The non-recipe recipe is here, along with one for potato chip cookies I am fighting against making.  By tomorrow, I will probably lose that fight.

Barley soup for lunch but then, as long as I had the pressure cooker out, I made a sort of hot borscht I had never made before.  I chopped a leftover half head of cabbage, 4 or 5 golden beets, threw them into some lackluster chicken stock, added onions, potatoes, dill, garlic,bay leaf, and a beef bone.  Twenty minutes later...golden beet and cabbage soup. 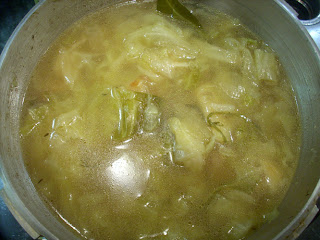 I tasted it and it's pretty good.  It doesn't taste like my nanny's hot borscht.  Hers was red, of course - and I think she added a pinch of sugar to it - and flanken (soup meat). Truthfully, I was never crazy about it.  And it doesn't taste like her wonderful cabbage soup (which I make sometimes). No beets - just cabbage, onions, canned tomatoes, a beef bone, bay leaf, pinch of brown sugar and lemon or sour salt so it is sweet and sour. Mmmm. I might take half of this soup and make it into that cabbage soup.  But not tonight.

Yesterday was another cooking day.  Jeremy, Anne Marie, David & Jake came for post-holiday lunch, since I had to give the boys their Chanukah gifts - gift cards to Barnes & Noble.  Leave it to Jake: "you gave me this last year," he said. Snort! No doubt next year, too.  Anne and Jer requested latkes, and I baked an apple cranberry pie because they were not here for Thanksgiving and it is Jeremy's favorite.  He took the leftover latkes and pie home with him.

I have stopped working and will treat myself to a bit of reading time before I go upstairs. Tomorrow, I am hoping to have time to play.
at December 12, 2010

Very interesting soup variations! My Mom and Granny only made the red version. Beef, red beet, carrots, whole or half onions, potatoes, white cabbage (not too much), the ingredients cut in larger chunks, and a trefe spoonful of sour cream which looks nice in the burgundy brew.

I've never cared for mushroom barley soup -- does that mean I'm less than a full Jew?

LOL, Connie. My daughter doesn't like lox. And II could live my whole life without eating gefilte fish and I wouldn't miss it.